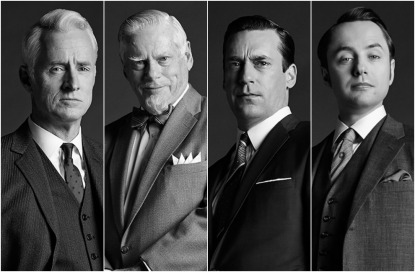 In the seminary we had an established night called “Mad Men Mondays.”

A small group of us gathered together for some fellowship every Monday evening to watch three or four episodes of the Mad Men series. The series chronicles an advertisement agency on Madison Avenue during the 1960s. As a timepiece, the show’s settings, fashions, and music are all meticulously researched to match the decade, right down to the cereal boxes, wallpaper colors, and pictures of Pope John XXIII on the wall. I credit the show for the return of men’s fitted suits and skinny ties.  Now all the hand-me-down ties I own from the 1980s look ginormous.  Thanks, Mad Men.

The characters are elegant and their suits always proper. No baggy jeans or ball caps, but combed hair and a sense of self-worth. The show seems to exhale a sense of class and a time when “men were men.” Right?

At the end of every episode—and I mean every episode—my friend Justin (now Fr. Justin) would sigh his routine reaction: “I hate this show.” While noted for its poignant storytelling and nostalgic charm, the show hosts a cast of amoral characters who all seem doomed to self-destruction. Every character possesses wealth, prestige, or success of some measure, but absolutely no one is happy.  No one.

It’s hard to find a character to root for. Just about every man and woman falls to infidelity, lies, greed, or unethical business conduct. Overall, it’s a depressing show to watch, especially since the lead figure—the honored Don Draper—is the most self-absorbed and self-estranged character of them all.

I remember my mother being somewhat distraught that her “future priests” were watching the show. I assured her that we weren’t emulating anything we saw…except for the skinny ties.

Here’s the paradox of Mad Men: the men really aren’t men at all. They dress like men, walk like men, but not one of the principal characters can act virtuously, get over his self-centeredness, or remain faithful to his marriage. It’s characteristic of this culture of narcissism and believing that if we dress up men, they will act like men.

What I do like about Mad Men is its honesty. The characters all face the consequences of their actions. This probably has something to do with the show’s writers being predominately female. I was initially shocked when I learned that seven of the nine writers of the show are women, but it all makes sense (if men wrote the show, there would be way more explosions and fighting robots). The male characters all seem to believe that they have control, but no one has enough self-control to hold their lives together, and so everyone—especially the women—suffer. All the men look into the mirror of their own misery because they take the selfish road over any kind of sacrifice.

I haven’t learned much from Mad Men, and I’m not necessarily encouraging anyone to watch it. I do think that our dysfunctional culture produced this show when it did for a reason, though, perhaps even as an unconscious call for the return of authentic manhood. Take the current magazine market for men, which is a far cry from any noble standard of masculinity. Magazines like Maxim or Esquire dress boys up with nowhere to go but back to a self-indulgent pit, and Men’s Health is anything but what its label suggests—change Men’s to Boy’s and Health to Perpetual Adolescence and Destructive Behavior and I think you have a more accurate title.  I don’t care about the recycled workout tips that my dad and I have seen since the ’80s; the magazine regularly encourages and gives tips for anonymous hook-ups, developing a philosophy of egocentricity, and indulging in pornography because of its “health” benefits. How is this forming men?

I see the rise of websites like Art of Manliness or Those Catholic Men as grassroots efforts to bring men back to virtue and authentic masculinity. Virtue is a gradual growth for us all, requiring prayer and discipline to achieve greater integration. “Integrity” is a word that I try to hammer home for the boys I work with, to be the same man that you are in every situation, an integrity that especially reveals itself when no one’s looking.

I know that I haven’t always lived with such standards of honor, and I know that there have been times when I have led women astray or been careless with the hearts of friends. Mad Men sometimes stirs these memories in my heart. Thanks be to God for his mercy and forgiveness. If I am merciful with these young men, it is because I myself have been shown great mercy. When Jackie looks at me now and tells me that I am a “good man,” my heart breaks a bit. My heart breaks because I know that I haven’t always been so, but I know that the goodness she sees in me reveals how God’s grace can make all things new. 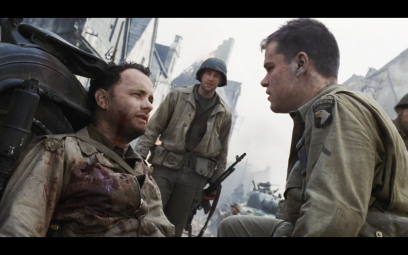 At a recent retreat a fellow teacher used the imagery of that very manly movie Saving Private Ryan to argue that the cry within every man’s heart is to know that he is a good man. In the film, blood has been spilt for James Ryan’s life and his ability to return home, and he was charged by his commander in the finale to “earn this” freedom. “Am I a good man?” he asks his wife years later, wanting to know that in the twilight of his life his deeds matched the sacrifice given for his freedom. The Christian parallel is simple. Jesus Christ, the paradigm of manhood, shed his blood for our salvation and we are now charged to “earn this” freedom. Will we be faithful servants? Will we be men of sacrifice? Will we be good men?

Blessed Pier Giorgio Frassati, patron of well-dressed men, pray for us all!

There’s no shortage of literature out at the moment detailing the sad state of men and the fatherlessness epidemic, but I do not believe that this culture is lost. I believe self-centered boys can still become selfless men.

We need mentorship and discipleship. We need rites of passage and accountability. We need good men.

Skinny ties and Old Fashioneds are great. But I prefer the fellowship of good men.

One thought on “Mad Men and Good Men”