They Will Know We are Christians by Our T-Shirts

“They will know we are Christians by our t-shirts!”

I remember first seeing this parody of a well-known Christian anthem several years ago in college on a bumper sticker.  Since then, I’ve seen the jab a few times on the internet and ironically once on an actual t-shirt (its owner looked proud).

But the slogan stirred some initial discomfort inside of me, and I think it has sat in my subconscious ever since.  See, I came to an authentic awakening in my Christian faith because of a dynamic youth ministry program during my high school years, and thus transformed into the Jesus-shirt and scapular-sporting young man throughout my college years, until I came upon this particular bumper sticker.  The moment lasted but a second, but it forced me to reflect on some uncomfortable questions:  Do people only know that I believe in Christ because of how I dress?  Has my faith truly transformed me internally, or is this just a naïve, external bubble?  I didn’t want it to be so.  Hence I pulled a Spider-Man 2 (Tobey Maguire, not Garfield what’s-his-name) and valiantly threw down my exterior costume, hoping to infiltrate the culture as a “normal guy” and prove that my love of Christ could become self-evidently radiant through my actions and not external garb.

As Catholics, we love to fall back on that wonderful expression long (and perhaps falsely) attributed to St. Francis of Assisi: “Preach the Gospel at all times, and if necessary, use words.”  We have to walk the walk before we ever open our mouths to witness.  And certainly our out-and-out earthly model (and ever humble “Man of the Year”) of this restless evangelization is our own current shepherd—Pope Francis.  There’s no such thing as a “private faith,” a faith that sits at home and is divorced of my public life, according to the Pope’s latest work, Evangelii Gaudium (EG):

Consequently, no one can demand that religion should be relegated to the inner sanctum of personal life…Who would claim to lock up in a church and silence the message of St. Francis of Assisi or Blessed Teresa of Calcutta?  They themselves would have found this unacceptable.  An authentic faith—which is never comfortable or completely personal—always involves a deep desire to change the world, to transmit values, to leave this earth somehow better than we found it. (EG, #183).

But that lovely “use words when necessary” hides the slithery, silent temptation countless Catholics and I fall into again and again: “never open your mouth.”  “I’ll be a nice person, give to the poor, but I don’t want to talk about Jesus.  I don’t want to impose anything on anybody.”  That bumper sticker convicted me rightly—to act and serve the Lord quietly—but I went too far and became too timid.

The odd thing about Jesus Christ is that He angers people.  You can’t talk about the guy and expect a civil conversation.  People usually get weird or give you that uneasy look that seems to say, “You actually believe in Jesus? Oh no. A real Christian.”   I’ve regrettably chosen complacent silence over boldly witnessing many times.  Even when I was in seminary, I would dread those wonderfully superficial conversations that tend to happen on airplanes.  If I failed to put my headphones on in time, here’s how it would usually go: 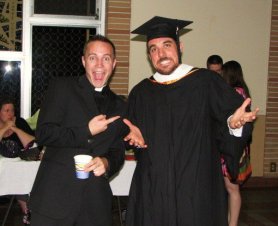 “What are you studying?”

Now if the conversation got to this point, I would have to discern whether to drop the “I am in formation for the Catholic priesthood” line.  If I did, one of three responses would occur from my seatmate:

2).  The irritated (and usually wounded):  “Really?  Let me now tell you all the things I hate about the Catholic Church…”

As a lay man now in the vocation of marriage, I’m back in the role of the covert, secret-agent Christian who dresses and externally looks like everyone else (well, everyone with a beard).  Clergy and religious—the ones who really embrace their vocations—can’t help but joyfully display their exteriors: the habits, the collars, and the awesome Birkenstock friar sandals.  But we, the laity, have to decide how we will visibly incarnate our invisible faith, especially to the increasingly atheist, neo-pagan Western world that grows more hostile to outward religiosity with every year that passes.  We absolutely need internal conversion and a life cultivated on the virtues, but, as Pope Francis entreats us, we need to be joyful witnesses to the world. 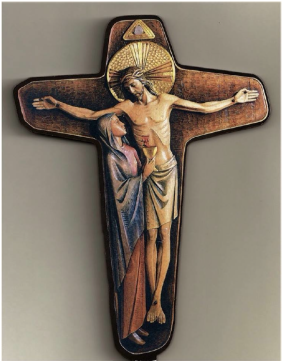 It’s been on my heart these past several months (and it kept recurring in prayer) to start wearing a cross again.  I decided that it was time to overcome the condemnation of that stupid bumper sticker.  I love the Schöenstatt cross (also called the Unity or Nuptial cross).  Originating in Chile during the 1950s, the cross depicts Mary at the foot of Jesus’ crucifixion, receiving the outpouring of his blood and symbolizing (among many other points) the redemption of the New Adam and the New Eve.   It’s also the cross that Mother Teresa (also a worthy model of boldness) adopted for her Missionaries of Charity.  I put the cross in my Amazon wish list and there it sat for four months.  I was too lazy to pay the $11.

Now I didn’t tell anyone about this cross, not even Jackie.  It just kept coming up in prayer and it continued to sit in my Amazon account.  I’ll get around to it someday.   I went on a retreat at the beginning of January, and halfway through I received a letter from a co-worker who was praying for me.  Inside the letter was the Schöenstatt cross.  I did a triple-take:  “Ok, God…this is weird.  Very weird.”  I put the cross on immediately (I didn’t want to be smote by the Almighty).  Since then I’ve gotten a few comments on the street, in an elevator, and one fellow gym rat’s exclaim, “Dude!  You’re Catholic?  Where do you go to Church?”

We should cultivate an interiorly strong, intimate, and private faith built on quiet prayer and humility.  We should also outwardly toil with our hands to feed to poor, clothe the naked, and defend life in all its stages, womb to tomb.  It’s a “both/and”—“faith without works is dead” (James 2:17).  Our private faith must, as Pope Francis affirmed, organically spill out into our public personas, unless of course we (1) are ashamed, embarrassed, or indifferent to it, or (2) we don’t really believe it.

When asked the question, “Is Christianity dying?” in a recent interview, pastor Rick Warren noted that,

The age of lukewarm Christianity is ending.  Battle lines are being drawn.  America is trending towards a secular, atheistic state with each year that slides by.  Christians must decide whether to take a stand or silently assimilate into our neo-pagan culture.  Benedict XVI prophesied that our Church may have “to become small” again, small as Christianity’s humble first communities, but if so we are still called out into the world, not to merely “blend in.”

Introverts and extroverts alike, put on the armor of God and be ready for persecution—it’s a matter of when, not if.  “If the world hates you, realize that it hated me first” (John 15:18). Be bold in your actions and in your love.  Stop apologizing for being Christian.  Oh…and wear your Jesus shirts if you got ‘em.

St. Thomas More, patron of lawyers and inspirer of all Christians to grow some cojones, pray for us! 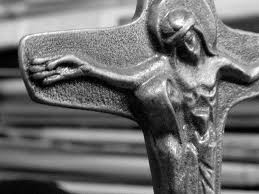